Like most people I do not pay much attention to the knives I use in the kitchen, I have had some decent ones but nothing special, until lately.  I picked up an Italian kitchen knife a couple years ago for my wife as she wanted one with scallops in the blade, saw something on television about how effective the scallops worked.  It worked ok though I was not particularly a fan.  The wood handle broke and my wife wanted it fixed as it had been a gift from me.  I told her it wasn't worth the cost/effort.  As usual, my wife prevailed.  I sent the knife, along with a beautiful piece of Ironwood, to my friend and knife maker extraordinaire Ken Steigerwalt.  Ken re-handleed the knife reshaping the handle contour in the process and sharpened the blade.  The knife now cuts like nobodies business.  It is now the best knife in the kitchen. 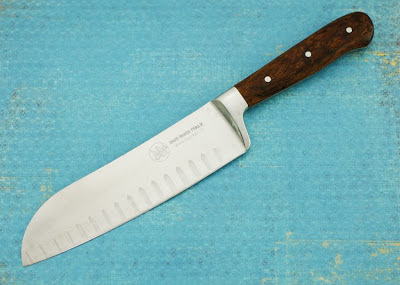 I was at the Knifemakers Guild Show in Louisville this past September and saw a knifemaker with some pretty cool kitchen knives on his table.  I took a friend over to his table to show him my find.  He bought the knife I liked the best!  You snooze and you lose as they say.  I went back on the hunt.  Wesley Hibben, one of Gil Hibben's sons was displaying at the show.  Along with the many other types of knives on his table was a kitchen knife which is now mine. 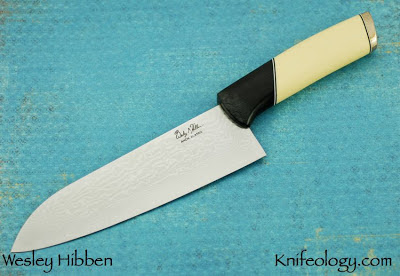 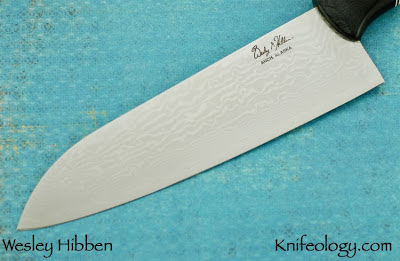 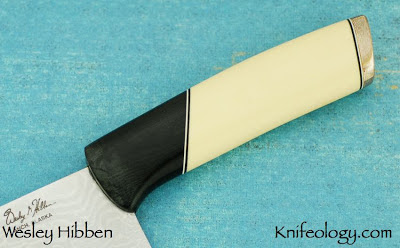 Don Andrade was a knife maker with whom I was not familiar.  Don makes some really cool knives.  Tai Goo is a mentor and it shows in his style.  I purchased an Integral Utility and a Camp Cleaver from Don.  The Integral Utility features exhibition grade African Ebony and a Lemon Wood inlay.  The Cleaver features African Blackwood, Lemon wood inlay and resin impregnated cotton woven wrap.  these are two beautiful and functional knives. 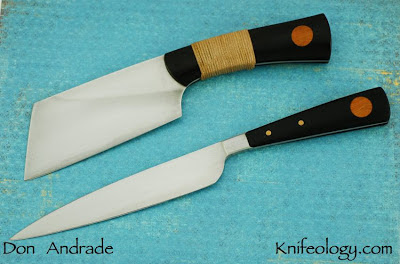 Definitely more fun to cook with cool knives!
Posted by Mark Strauss at 11:39 AM No comments: